Exposing fraudsters in 2020 requires new skills.  The business world has gone virtual and so has fraud. Whether you want to be a fraud finder or a fraud fighter the 2020 Fraud Conference will equip you to successfully: 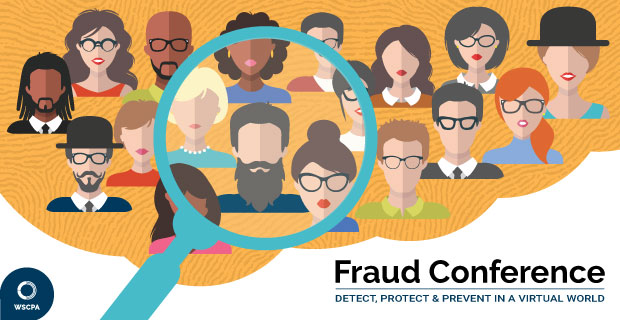 Discover new skills and techniques for discovering fraud in our current virtual world.

Today’s technological advances allow businesses to be more efficient than ever before. But it also increases the threats from cybercriminals. During this session, we will explore how hackers use social engineering and explain how it works, how to prepare for it, and how to protect your firm.

Cybersecurity threats continue to escalate throughout the world, causing a great deal of concern for CPAs and their clients. The U.S. is a well-developed country with abundant resources attractive to cyber-criminals. CPA firms do not provide big money exploits for hackers, but they are rich with financial and personal data that is desirable for ID theft; blackmail; and insurance, tax, and other types of fraud.

Most small or medium-sized businesses (SMBs), including CPA firms, do not have the internal resources to recover from breaches without the help of external experts. While data security tools to protect against or stop a cyber-attack are becoming more sophisticated, hackers are constantly recycling and updating old exploits and inventing new types of attacks such as cryptojacking; typically, they are often one step ahead of the law or discovery. An effective data security policy and an incident response plan form the foundation of a CPA firm’s overall risk management program.

This high-level, fast-moving session will increase your awareness of cybersecurity best practices and recognition of trending cyber-threats and will cover topics such as:

Figuring out if a client is being truthful can be difficult enough when you’re talking face-to-face. Now, in the midst of the COVID pandemic, communication has been streamlined to video calls. Limited nonverbal communication in virtual calls doesn’t have to make reading people more difficult. Accurately identifying body language and spoken word hot spots will give you the edge in separating fact from fiction. This interactive session will give you an advantage in targeting possible deception in your video conversations.

Learn about the Employment Security Department’s response to unemployment security fraud and takeaways that would be beneficial to businesses.

The 2020 pandemic has brought with it a pandemic of new fraud schemes.  During this session, we’ll look at the largest frauds of the year, the COVID-19-related fraud schemes, and what you can do to protect yourself and your organization.

When big data, artificial intelligence, and blockchain are incorporated into accounting transaction processing and financial reporting, there will be some significant impacts to fraud prevention and detection. Attend this session to get a better understanding of how these emerging technologies will be incorporated into accounting information systems and how they also present opportunities for better fraud prevention and detection.

Blanca Cobb, ranked in the Top 30 globally, is an internationally recognized body language expert who’s been featured on national television shows such as the Steve Harvey Show, TODAY Show, Megyn Kelly TODAY, Dr. Oz, Dr. Drew, CNN, Face the Truth, The Doctors to a name a few as well as publications around the world such as Cosmopolitan, Us Weekly, Elite Daily, Business Insider, Elle, Daily Mail among others. Blanca shares her expertise weekly on a CBS affiliate, WFMY News 2, in North Carolina.

When it comes to corporate America, Blanca’s in the relationship business. It isn’t only what’s said, but also seen that can either make or break business relationships. With an eye to uncover what you miss, Blanca will help you figure out the cues to possible deception in every day interactions.

Blanca founded a national holiday, National Body Language Day, that is celebrated the first Friday of every October. She is a graduate of UNC-Chapel Hill with a B.A. in Psychology and a M.S. in Psychology from N.C. State University.

Candi currently serves on the planning committee for the AICPA National Governmental and Not-for-Profit Training Program Conference. She is also a member of the CFOS Foundation Board of Directors and has previously served on the Fred Hutch planned giving advisory committee and on the Washington Chapter of the Association of Fundraising Professional’s board as its Treasurer.

Candi received her Bachelor’s degree in accounting from Western Washington University and is member of Seattle’s Leadership Tomorrow Class of 2016. She lives in Maple Valley, Washington with her husband and two active boys who enjoy baseball, boating and traveling to warm places.

Christophe Réglat founded Coaxis, a Florida corporation, based in Tallahassee, in 2002. Coaxis originated as an application service provider (ASP), offering businesses access over the Internet to applications and related services that would otherwise have to be located on their own business computers. ASP has evolved to cloud computing, and more distinctly to managed data hosting services for Coaxis. As President and CEO, Christophe leads the Coaxis team, serving clients in all 50 states, Canada, and India. Coaxis focuses provision of its managed hosting services to the financial, healthcare, criminal justice, and legal professions. The company maintains the highest levels of security and regulatory compliance for these targeted industry sectors through the ownership and operation of Coaxis’ private, single-tenant, data center. The data center features multiple power sources, four generators, four major Internet Service Providers, and has more than 10 levels of security to access the data center. Professionally, Christophe is recognized as an industry expert in managed data hosting and cybersecurity. He is an active Board and Executive Council member for the Florida Technology Council. Christophe serves as a member on the FBI’s Counter-Intelligence Task Force and has been invited to conduct Cybersecurity training with the FBI. Based on the FBI’s recommendation, Christophe serves as the Vice President of the Southeast Chapter of InfraGard. InfraGard is a partnership between the FBI and key members of the private sector which is designed to provide a vehicle for seamless public-private collaboration with government to expedite the timely exchange of information while also promoting mutual learning opportunities relevant to the protection of Critical Infrastructure. Through his leadership and corporate sponsorship, Christophe has been the driving force for the inception, continued success and growth of the Astronaut Challenge, the national STEM competition for middle and high school students, held annually at the Kennedy Space Center. In addition to leading Coaxis, Christophe has over three decades of certification and experience as a commercial pilot. As an avid aviator, Christophe enjoys flying for business and personal trips. He is an avid runner and fitness enthusiast. Prior to founding Coaxis, Christophe worked with Sprint PCS and Ikon Technology Service. Christophe completed his university studies in Marmande, France, majoring in Math, Physics andBiology.

Donny Shimamoto, CPA.CITP, CGMA, is the founder and managing director of IntrapriseTechKnowlogies LLC, a CPA consultancy focused on organizational development and advisory services for the middle market. An active CPA, Certified Information Technology Professional (CITP), and Chartered Global Management Accountant (CGMA), Donny is a recognized national expert in IT management and international author/speaker on business intelligence initiatives. Donny helps many organizations by bridging accounting and IT to strengthen organizational governance and risk management, improve business processes through IT, and increase the effectiveness of decision-making through business intelligence and evidence-based management. Donny is chairman of the AICPA’s Information Management and Technology Assurance Executive Committee, and former member of its Governing Council and Assurance Services Executive Committee. He has worked on several international collaborations between the AICPA and CIMA related to business intelligence and is also a frequent speaker on how management accountants can help add value to their organizations. Donny was recognized as a Top Thought Leader in Public Accounting by CPA Practice Advisor in 2012, 2013 & 2014, named a Top 100 Most Influential People by Accounting Today in 2013, received the 2009-2010 President’s Award from the Hawaii Society of CPAs, on CPA Technology Advisor’s 40 Under 40 list in 2007 & 2009, and was also a Hawaii Top High Tech Leader in 2004.

Mitch Hansen, CPA, CMA, CFE, is a shareholder specializing in serving nonprofits and governmental entities. He has integrated his previous experience as a federal auditor with his public accounting experience to create an exceptional and well-rounded knowledge base. Mitch is active in a number of professional organizations and served on many nonprofit boards.

Achievement oriented finance technology leader with solid credentials (Gold medalist and 2 times rare CFO Award winner) & 15+ years of global experience in setting the vision, and ability to execute on that vision by leading teams. An enthusiastic leader with organizational aptitudes, deep technical and financial experience & proven ability to lead high-performing teams, build strong relationships, foster efficiency and create an impact. Recipient of Highest Award for Leadership 2018, Dale Carnegie’s “Advanced Leadership Program” and received many presentation awards in the last 2 decades and on a journey to learn it all. Currently leading Technology and Data Analytics Team for Microsoft’s Audit Group, Pooja Sund’s Personal Quote is “Strive for Excellence, never be satisfied with the second best.”

What others say about her: • Leader with a vision • Your passion and enthusiasm are contagious and your willingness to recognize others is laudable • Outstanding speaker (great energy, enthusiasm and relevance) • Excellent collaborator, energizer, Motivator, Ideator

Pooja is currently mentoring 20+ people in her immediate group and 30+ across Microsoft. A passionate speaker who also have a passion for leadership, coaching, mentoring, and speaking.

Randy Werner responds to CAMICO loss prevention hotline inquiries and speaks to CPA groups on various topics. Werner has Big Four public accounting experience in federal and state tax as well as regional accounting firm experience. She has practiced as a sole practitioner in estate planning since 1984.

Ms. Werner has been a member of the California State Bar since 1983 and is a member of the Taxation section as well as the Taxation Section’s Procedure and Litigation Committee. She earned a Bachelor of Science in Commerce, majoring in finance with an emphasis in marketing, from the Santa Clara University School of Business. She also earned a Juris Doctor from the Santa Clara University School of Law in 1983, a Master of Laws in Taxation from Golden Gate University, and a Master of Science in Accounting from San Jose State University.

Additionally, she has two publications in the area of Intellectual Property: You Say You Want a Revolution: Copyrights and Sound Recordings Destruction or Evolution? 39 Gonzaga Law Review 247 (2003/04), and From Kane to Lily, The Role of Transformation in Fair Use Intellectual Property Section of Washington State Bar Association, Volume 16, Number 1, 2005.